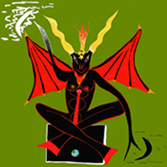 'Azazel', a construction by Troll Towelhead

A Feast of Heart-Felt Reflections on the Devil's Trail

One of the side-effects of the latest American and British moral panic is the greater visibility of transgressive and devilish religion. The advent of religious witchcraft brought to a head the usual Blood Libel employed by numerous previous Christian generations to decimate Gnostics and Jews, slander other religious competitors, and stir the populace toward conversions, pogroms, and genocide.

Fresh into the breach between acolytes of Pazder and New Religious Movement adherents, slathered in demonology and occultism, the motivation for establishing a service-oriented relationship with the adversarial arose out of principles established in theme by early Christians and perfected by the esoteric members of the Great Martyrdom Cult.

In the face of repeated Neopagan contentions as to the perils and errors of appearing or thinking wrong, being associated with the Devil, or associating with Luciferians, Setians, or Satanists, an education as to the realities behind the Satanic Panic of the 1980s, inclusive of an evaluation of indoctrinating seminars put on by Christians to inform civil authorities of their nightmares, critical scrutiny of the 'Recovered Memory Syndrome' being promoted by the author of Michelle Remembers, and a closer look at actual religious Satanists, were necessary.

In order to understand the conventional vantage point of the typical member of society in which it was occurring, studies in demonology, personifications of evil through time, and general occultism assisted in a grounding to undermine religious exaggeration and become aware of actualities beyond the scare stories. 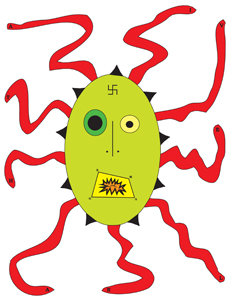 Leviathan as conceived and rendered by Troll Towelhead

With an eye toward ecological politics, a chance stumble across a comical advertizement stimulated a revelation during demonological studies: "Wild Nature is Calling". Of course! These theriomorphic demons (animal composites, a.k.a. draconic) were the symbol of hostile or adverse natural forces, imagined to be struggling with the Christian in some other dimension. With every disclosure of ordinary features behind the supposed superordinary threat brought out for examination in the light of day, and as the Satanic Panic began to wind down a little, it became obvious that not only were moral panics more common than a chance alarm during the end of the 20th century over fabricated satanists, but that the phenomenon of religious legitimation in the fashioning of cults using some of the imagery and language surrounding demonizing moral panics was new and escalating.

Having understood the relationship between these rising religions and moral panics, an added emphasis was placed on the support and development of these novel constructs. They had not yet seen fit to legitimate the entirety of demonological folklore, some parts (notably the Faustian, and pact-making aspects) had been left out of the creative enterprise. 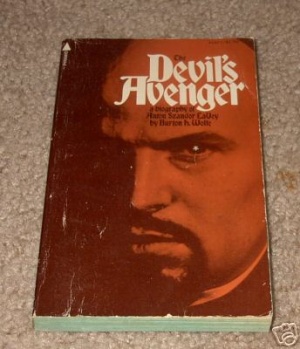 A second flash of insight revealed the import of the construction of a blood pact for purpose of alliance with Satan as so discerned. This would, by proxy, also make imperative a more detailed study of religious Satanism in relation to Satan, particularly during the time of the Satanic Panic. Sociologists had already extended meager inquiries in this direction, some of them becoming members of the Church of Satan itself, and journalists such as Margot Adler and Arthur Lyons had written in reflection of their encounter with Satanists (particularly Lyons, within his book "Satan Wants You").

It was as a response to the disinformation of the Satanism scare and in pursuit of the continued consequences of the established pact that this web site was constructed. Its initial format was angled steeply against the propaganda and erroneous conclusion within Christian culture (characterizing them as 'propaganda' and 'delusion' respectively and contrasting this with reflections by Satanic religious themselves). Its platform was initially just text, and this stumbled briefly into HyperText Markup Language before graduating to a Mediawiki presentation.

Within this conceptualization, a service to Satan is not completely effected merely by taxonomizing the rise of legitimating religion in opposition to demonizing moral panics. Nor is it sufficient simply to add merit and imagination to this developing enterprise, but identifying Satan as a facet and focus of ecology and subjective experience, and working to defend these, where convincing, from dominating and exploitative fear-mongers has become an important if intermittent project. The primary vector of impingement upon the uncontrolled terran wilderness is human reproduction coupled with technological advancement enhancing consumption rates and enabling disruptive activities such as terraforming which might be selected by the ignorant and indisciplined. The two most important facets of subjective experience demonized and left for too long unexplored in combination with everyday life are libido ('the sex drive') and the urge to achieve nonordinary states of consciousness (particularly ecstasy and euphoria). 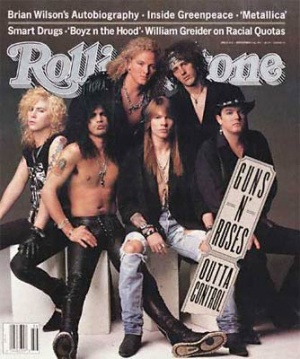 One of the major breakthroughs in an analysis of the novel religious response to the demonizing folklore and propaganda fomented by Christians and Muslims has been the identification of some of its central principles (in part during encounter or struggle with it). This enabled a clearer vantage point on describing it in comparison to previous religious creations. Mapping its initial emergence from Christian culture as a reactionary dependent, the primary descriptive element common to all apparent Satanisms is their positive association with something identified as 'Satan'. Comparable to the motif unifying many Christian sects, the natural religious composite term implied for reference to them (Christianity) may be extrapolated to describe the whole in the case of that surrounding Satan: Satanity.

A second, but no less important, principle inherited from its sister cults is a heavy emphasis on individualism. Academics have identified this emphasis as 'self-religion', or 'self-spirituality' and explained it as a facet or spin-off of the Human Potential Movement insofar as it emphasizes individualism (often rebellious) and self-development in pursuit of one's aims, values, and interests. Whereas sister cults like the New Age Movement (or the Hermetic or Thelemic subcultures) emphasize one's identification with divinity as a facet or foundation for this self-development, Satanism and its appendant relations appear to come with the added or substituted feature of being antinomian. This ties in to their thematic adoption of what is called (after Indian Tantric mystical cults and adoptions from occult authors) a 'Left-Hand Path' character.

Beyond this, and based on an emphasis of individual selections, all manner of religious and spiritual enterprise is manifesting under the banner of Satan. Some portion of this is adapting the folklore and condemnation schemes of Christians, whether literally or as part of a symbolic legitimation. Some takes the form of personal art, others attempt the more formal and traditional construction of a cult and liturgy. With the rise of theistic Satanism a more traditional 'service to Satan' has become possible.