Category:Working Within the Satanist Tradition 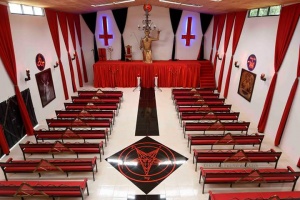 A Satanic temple; the dominant imagery is the inverted cross, the point-down pentagram, and the goat

Satanism is a group of religious traditions that developed from the religion of Christianity. Its major values.

Born in liberal California in the late-1960s, it reflected off of propaganda prooting phantasms of "satanism" alleged by Christians for centuries in order to construct something legitimate by a process known as re-embedment. Its less harsh and sometimes competing sibling religious movements were the proto-Satanic Thelema of Aleister Crowley and his followers, and modern Neo-Paganism, with its construction of witchcraft religion in the 1940s, as well as early Christianity, with its interest in mapping contemporaneous forbidden religious actions to its stations and protocols.

With the expansion of the media empowerment of individual promotions, Satanism flourished and numerous instances of it appeared around the world.

Its more hard-core aspects include pact-making and Demonolatry, the latter promoted by Stephanie Connolly and her Dukante Tradition, and softer valences include Luciferianism, which stem back as far as the Theosophical and New Thought movement and draw on Romantic poets and Neo-Gnostic ideologies.

This category currently contains no pages or media.